I was a Division 3 punter and kicker and played football at the University of St Thomas.  I also was a 6 year NFL Free Agent Punter.  I found this great article about the "Reality of Small College Recruiting."  It is worth the read and consideration for schools to play for.

Here's my story as to why a Smaller Div 2 or 3 school isn't that bad.

I had a great career at Armstrong High School.  But I as plagued with a knee injury in the middle of the season which most likely eliminated my chances of playing Div 1 football.  The kicking points I had, combined with the points scored by the back up kicker, would have made me one of the top metro kickers.

I was recruited by St Thomas to play.  They were a great football program in Minnesota.  But just like the article states I had no idea who they were until another football friend told me about them.  I looked into them and they were well known for their business program which I was interested in.  I was recruited by a few other programs, but ultimately chose St Thomas.  I was able to play Football and pursue a business degree.  St Thomas was one of the best experiences of my life, both athletically, socially and academically. As the article states "...smaller colleges are better for the student, keeping them engaged and excited about learning. Those smaller classrooms are able to give you personal touch and one-on-one experience with your teachers and fellow classmates, then the lecture halls with 300+ students," which I loved. 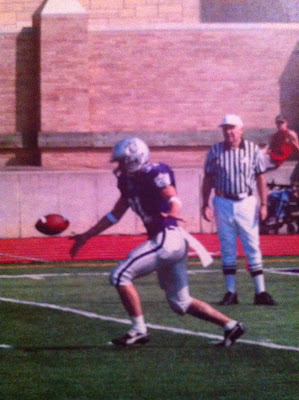 On a sports related side, in my final year of football, I had the best punting year of my life.  I was one of the top punters in the conference, and for most of the year, one of the top 15 or so punters nationwide.  I had a cannon for a leg.  Based off my last year, I was recommended by coaches and friends to pursue the NFL.  I started training for it.  I attend the Louie Aguiar/Michael Husted Free Agent Pro Scout Combine and it was a great experience.  In my first year there, I was one of two Division 3 kicker/punters there.  I attended that Combine over the next 4 years, and each year, more and more Division 3 athletes started to attend.

To make a long story short.  If you are a great kicker, punter and long snapper, and you have the abilities and dreams to pursue professional football and the NFL in the end.  It doesn't 100% matter what level of football you played for.  It doesn't 100% matter what your body shape and size is.  If you can make a field goal from 45-50 yards out, or punt a 45+ yard punt with 4.5 second hang time, you can do it and will have a chance.  Maybe a big Division 1 program is sexy to NFL scouts because you played on a higher pressure stage, but in the end, it's all about your abilities and you can do it. 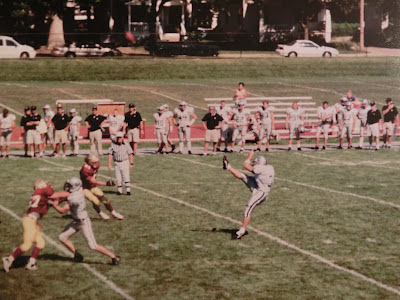 Don't be afraid to consider a Division 2 or 3 program.  You'll get a great education, and more times than not, you have that to fall back on if you don't make it to a pro level. 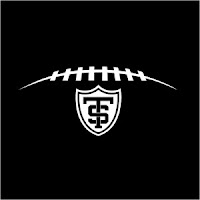 The UnBINGable Question, "How much do cheerleaders really matter?"

A friend of mine, Scott Schneweis, works and creates the Yokal Sports Report.  He asks the question "How much do cheerleaders really matter?"

Scott and I use to be the kicker and punter, respectively, on the same Semi Professional Football team, The Minneapolis Lumberjacks, for about 3 years.

I think this video is rather hilarious.   See below.

Scott also writes a great and funny blog called New Dad To Be.  Check it out here.

Interesting note:  local Minnesota kickers were used in this video.

Posted by Special Teams Football Academy at 3:21 PM No comments:

How to gauge a coach's interest in you.

Here is a great discussion and video on how to gauge a coach's interest in you, hosted by NCSA.

Many high school kickers, punters and snappers often talk to a variety of coaches that talk about your "potential" with their program, and they often wonder where they stand weeks and months later.

I think NCSA does a great job explaining how to handle the process. Enjoy the video below.

I'm really proud of the Transformation one of our students, Danny Laudet is making in his training. Here is his Transformation Video after only kicking for 4 months.

Danny's First time ever kicking was Jan 2012. Since then, he has been working hard perfecting his Field Goals, Kickoffs and Punting. This year, he has attended various Winter Kicking Clinics run by Special Teams Football Academy, as well as private lessons from various trainers.

Danny & I meet for a Private Lesson and to Film his progress to show his improvement.

This is a highlight video showing Danny's transition from just starting kicking 4 months earlier, to putting himself in a position to be one of the top Minnesota kickers in the 2012 season. The video show's Danny's consistency on 9 straight Uncut Kickoffs, as well as going 9 for 9 straight Field Goals between the 30 yard hash marks and the 50 yard line.

Here is a video of Danny's first time kicking in Jan 2012: http://www.youtube.com/watch?v=X_gZyShNzcs&feature=related

Posted by Special Teams Football Academy at 10:25 PM No comments:

What is your longest field goal in a game or practice?

Posted by Special Teams Football Academy at 8:08 PM No comments:

The 4th and last Special Teams Articles of 4 installments by MinnesotaPreps.com featuring one of our student kickers, Alexi Johnson of Shakopee HS.  Alexi took some time after attending our recent kicking clinic to visit with MinnesotaPreps. Tune in and learn more about this talented young player.

Alexi is an excellent kciekr and was the Leading Junior Kicker in 2011.  He was all one of the top 3 overall kickers (overall points) in MN.  He's one of the kickers to watch next season.  We are excited to be working with him and tracking his progress. 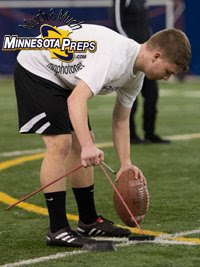 
If you are having trouble viewing the article. Check out the article titled "Danny Laudet- Kicking it!" on our "In The News" link on SpecialTeamsFootballAcademy.com.

Posted by Special Teams Football Academy at 4:30 PM No comments:

Here is an Article by MinnesotaPreps.com of one of our student kickers, Danny Laudet of Stillwater.  Laudet attended our kicking clinic this past weekend at the Dome at Holy Angels in Richfield, Minnesota.  Danny has an excellent leg and Division 1 potential.  We are excited to be working with him and tracking his progress. 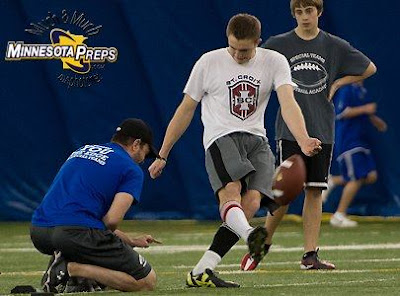 
If you are having trouble viewing the article. Check out the article titled "Danny Laudet- Kicking it!" on our "In The News" link on SpecialTeamsFootballAcademy.com,

Posted by Special Teams Football Academy at 11:24 AM No comments:

"Kickers Train All Year Round" with Kicking Lessons

MinnesotaPreps.com came out to our last Kicking Clinic on March 31 to check out some of the areas top talent.  MinnesotaPreps has been a great supporter of what we do.  I also wrote special teams articles for them last year acknowledging the great specialists over the coarse of the year.  To Read and watch the interview click: Here 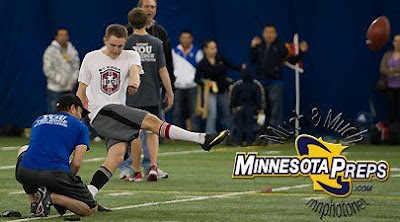 If you are having trouble viewing the photo.  Click on our "In The News" link on our website.  See the video titled "Featured On MinnesotaPreps.com"

Posted by Special Teams Football Academy at 11:04 AM No comments:

How Do I Know if a College Football Coach is Really Interested in Me?

My best advice it to just ask where you stand in their recruiting process or where their interest level is.  Many high school athletes are afraid to ask.  It is best to know what they feel about you, than be lead on.  - Chris Husby