How do coaches find you?

Coach Taylor from NCSA discusses and explains "How do college coaches find out about recruits?"  Some great ways to get your name out there.

What is Junior Day?

Coach Taylor from NCSA discusses and explains "What is a junior day and how can I be invited?"

Last week I was contacted and featured in the "Super Dad" Featured article from the website NewDadToBe.com.  It's a hilarious Daily Blog from Scott Schneweis, who blogs about his experiences of as a new dad.  Below is the article featuring Coach Chris Husby of Special Teams Football Academy.

I'm not sure if Chris Husby is a better dad or field goal kicker. Perhaps we should put him through some sort of Dad Combine to decide.

Chris Husby is a former NFL prospect and all-around good guy who runs Special Teams Football Academy. He is also a SuperDad. His daughter Olivia is 15 months old and Chris talks about her with more excitement than he talks about football (which is saying something). In search of some useful advice – preferably in the form of sports cliches – I sat down with Coach Husby to talk fatherhood.

Alright Chris, is it tough for a guy’s guy to raise a little girl?

I joke about teaching her how to kick a football, so that she’ll be the first NFL female kicker. I do dress her up in Twins and Vikings outfits.  About 3/4 of our family are Packer fans so I’m trying really hard early on to get her to like the Vikings before everyone else corrupts her.
You’ve been a dad for 15 months now, what’s been your favorite part?
Watching her grow and develop from a 30-week old premee into being able to walk, clap and say a few words and know that you helped get her to that point. It’s amazing and a little scary to be fully responsible for a human life.

And the worst part, other than the fear that comes with being responsible for a human life, that is?
3 a.m. feedings when she won’t go to bed aren’t too fun.

Rosalie is three months old. What’s the best advice you can give me for this period in her life?
Every week just gets better.  Once she gets mobile, the new things she’ll do are endless.  It’s cool watching her learn all these new motor skills that you teach her, and that I used to think were 2nd nature. It will make you rather come home after work than go out and do anything else.

What about for the future, what’s the one piece of advice you would give me?
Start saving money for college.

And the past? What would you go back and tell yourself before Olivia was born?
Get more sleep. Go to bed early.  Start a week before the due date.

To read more about these hilarious "Dad Blogs" click here.

This winter we started giving winter kicking clinics for specialists to have a spot to train over the winter.   We were finding that kids were having trouble finding space at their own high schools to kicker and the local sports domes were often too crowded, so we started renting dome time for 1 hour training sessions.  It was a great opportunity for specialists to work on fundamentals and get their swings going again, without having baseballs, frisbees and other objects flying by them.  We had many of our instructors at the camps working on various aspects of the kicking & snapping game. 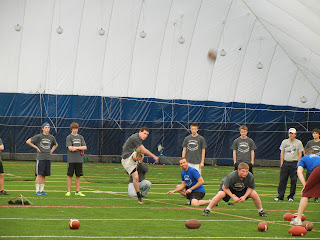 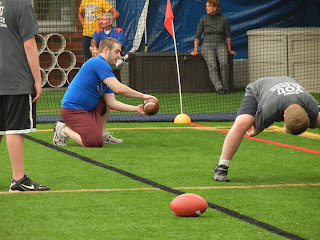 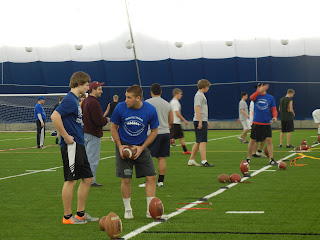 These are the remaining 5 winter training dates:

Here are a few examples of our last 2 clinics:
Feb 5- Video

This past month (Feb 17-19) was a busy one for myself and 7 Minnesota High School Specialists. 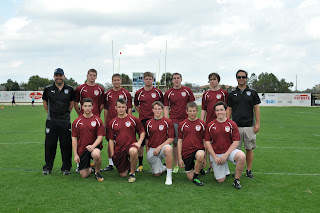 We all traveled down to the National Camp Series- Super Camp 6.  It was my first time coaching at the event, and all these boys first time traveling to a major kicking camp.  Minnesota kickers Alex Friedrich, Alexi Johnson, Tucker Lorentzen, Tim Vassallo, Jon Coppens, Tyler Knutson and Patrick Leccore all were in attendance. 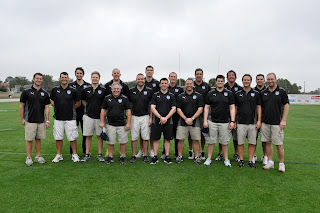 During small group instruction, I was teamed up with Nick Fleming of All American Kicking (Orlando, FL).  We worked with 3 small groups of 8-10 athletes from the West and Northeast areas of the US. It was a great experience to be able to give back to more kids as well as learn from another instructor.

After all the small group training every athletes did their NCS charting.  One thing I noticed that became apparent while down there is that many of these kids have had the abilities to train year around.  I just started offering Winter Kicking Clinics (video) to allow kids the chance to train over the winter.  We had just completed 2 of them over the winter and planned 5 more between this weekend and mid April.  Needless to say I'm very proud of how our guys did from MN considering they didn't get to train as much as these other kids.  A few charts that stood out include:  Tim Vassallo from Rochester Lourdes (Sophomore Class) going 10 for 10 in FGs.  Patrick Leccore from Edina (Freshman Class), represented well going 8 for 10 on FGs and excelling in his KO chart with a 61 yard average (averaging a potential touch back over 10 KOs).  Tucker Lorentzen from Champlin Park (Junior) went 9 for 10 in FGs and averaged 60 yards on his KO chart.  Alex Friedrich from Tartan (Senior) improved immensely on his Kickoff and Punting chart averaging 64 yards and 37 yards (with a 3.7 hang time) respectively.  Alex is really setting himself up as a potential dual kicker in college.

Every kicker was ranked and seeded in a kicking tournament. For some kids that didn't chart well, it was a chance for redemption to see if they could be the top kicker, punter or snapper in the NCS nation.  We had a few guys that really did well. Patrick Lecorre made the Final 4 in Punting & Elite 8 for FGs and KOs for the Freshmen. Tucker Lorentzen and Alexi Johnson for finishing in the Elite 8 in field-goals out of 45 Juniors. 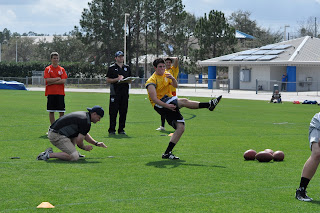 This year I was named the Midwest Coach for the Team Kicking Tournament, which was the first year this team event was created.  We had 13 kids from our region competing.  The best team score from the NCS chart won.  This year it was the Northeast Team from the NJ area.  Unfortunately it wasn't Team Midwest's year, but next year we'll come back bigger stronger!


Overall, it was a great camp to see the caliber of many Top Kickers in the country.