Myth Of The Walk-On Kicker

Today I came across a great article that is actually almost 2 years old talking about the "Myth Of The Walk-On Kicker" and how it's not as simple as many people assume it is to just walk on to a college football program and kick a football.  This is a great read for anyone interested in understanding "College Recruiting" and "Walk On Athletics."  The article was written by Brad Allis. Brad is Editor-In-Chief of http://WildcatSportsReport.com  and co-host for UA pre and postgame shows on KCUB.  You can follow his work on Twitter @WSRBrad. You can read the original article here.

Myth Of The Walk-On Kicker
By Brad Allis

There are a lot of common misconceptions about the kicking game. Although it is an integral part of football, it is unlike any other position in football. Kickers and punters are truly unique in nearly every way, from how they are recruited, to how they practice, to how they are handled.

With Arizona’s recent struggles in the kicking game I keep hearing the same thing, “why can’t they just go out and find a walk-on?” or “can’t they just find a soccer player and convert him?”
Many people seem to think kickers grow on trees, and in some ways they do. Wildcat Sports Report has two former high school kickers on staff. Heck, last fall at halftime of a high school football game I won a $10 bet by kicking a 30-yard field goal that would have been good from 40, maybe 45 yards, without warming up.

But that is the difference. Just because you can kick, does not mean you are a kicker. There is a lot more that goes into kicking than just having a strong leg. I split the uprights by taking my time and kicking it out of a hold. There was no snap. No timing and certainly no one rushing. The only pressure was a couple of 10-year old kids who stopped playing catch to watch.

People kept wondering why the Cats did not go out and have campus wide tryout a year ago. Well, it’s not that easy. Dick Tomey used to have open tryouts the first week of classes when he coached at Arizona. For three straight years I knew guys who tried out. One year they said there were at least 30 kickers there, four of whom were All-Region in Arizona. In three years they took one kicker, and he never played.

A guy in my dorm was All-Region (at Amphi I believe). He was told he just didn’t have the leg strength to kick at this level. He said he could hit from 45-50 yards in practice, but admitted he just did not have the lift or “power” they were looking for. Although he routinely put balls in the endzone from the 40 in high school, he could not from the 35. Even worse, he did not have the timing or the steps to do it with the timing needed by a D-I team. He needed to line up 10 yards off the ball, not the normal five. He did not have the hang time.

The fact is there is a huge difference between being a really good high school kicker and being a college kicker.

Pulling a kicker “off the street” is even tougher. First of all, adding a player mid-year is tough. You have to have a roster spot available. Even with walk-ons, a college roster has a cap. You can’t just stockpile 300 players.

Assuming you have a roster spot, and a kicker who is good enough to fill it, can you get him ready? This isn’t the movies where you can turn a garbage man or a mule into a game-ready kicker. Any one you get “off the street” will need to get their mechanics in order, get their timing back and get used to the speed of a D-I kick block team. That can rarely be done in a week. In the NFL free agent kickers spend the time they are off a roster working out. Many play semi-pro ball or kick against high school teams. The average college student is not doing that.

Now, that is not to say it can’t be done. Schools have found kickers with zero notice, but it is rare.
The best comparison I can make would be trying to take a player who can knock down a bunch of three-point jumpers alone in a gym and trying to make him a D-I shooting guard. The act of shooting (or in the kicker’s case, having a strong leg) is just one part of the make-up of a D-I player.
This is part one of a three part series on the kicking game. The next two stories will focus on what the Wildcats did right in handling the kicking game and what they did wrong in handling the kicking game.
I'd love to hear your thoughts on this article. Please comment below.

Posted by Special Teams Football Academy at 9:20 PM No comments:

Below are two Testimonials I have recently received from two of the top specialists in the state of Minnesota (Class of 2014).   Both Reid and Connor rank as some of the top in the country as well according to some of the National Kicker/Punter Evaluation platforms.  I have worked with both Reid and Connor for 3 years now and both have bright futures and will have some exciting Senior years of football to follow.

Read about how training with Special Teams Football Academy can yield RESULTS and give YOU the EDGE in Special Teams! 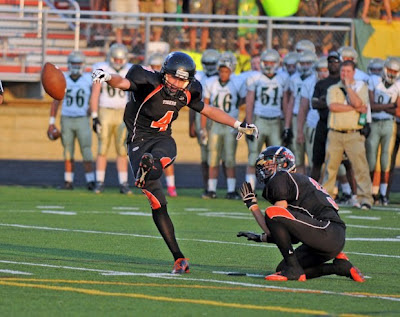 "Coach Husby has been working with me since I very first started kicking.  At my first camp of his I went to freshman year he gave me basic skills to work on and then he progressively molded me into a kicker that now has a serious chance of kicking at a division 1 level.  Coach Husby has not only helped me with the physical skills of kicking, he has also helped me with the mental aspect of it. I was kicking at the University if Minnesota's specialist camp, and had shanked 2 kick offs, he came over to me and told me to keep my composure and to block those kicks out of my head and to focus on the next kick, and my very next kick was 70 yards with a 4.0+ hang time. Coach Husby has not only helped me kick better for my football team, but has helped give me a chance to accomplish my dreams of kicking at a collegiate level." - Reid Taubenheim (Farmington K/P)

Last season (2012) Reid tied a Minnesota State Record on field goals going 4 for 4 in 1 game as well as kicking the longest field goal of the year in Minnesota of 48 yards in the same game. 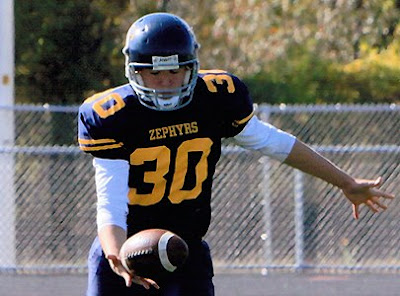 "Commitment. Connor has been a student of Coach Chris Husby and his staff at Special Teams Football Academy since October 2010. Three years later, Coach Husby has always been there for Connor in all aspects of teaching and mentoring in what it takes to be a competitive athlete. Chris surrounds himself with a quality and experienced staff that understands the process of getting the best out of every athlete in a positive environment.  Chris has not only has established himself as top instructor in the kicking, punting, and long snapping arena, but is impacting the future of some of the nation's best specialists.  Top college and university coaching staffs are finding out what we’ve known for years, that Coach Husby, is a trusted source to them in the instruction and recruitment of their scholarship athletes. Whether being at a Minnesota Specialist Camp, National Camp Series, or private one-on-one lessons, Coach Husby’s personal goal of getting quality affordable training and exposure to future playing opportunities is something we will always be grateful as parents. Coach Husby has been the answer for us in building both the physical skills and mental confidence in Connor.  Connor is not a nationally recruited punter today without Coach Husby's instruction and commitment to him."  - Marc and Ronda Bolduc  (Parents of Mahtomedi Punter)

Here is a recent video of Connor punting.

Posted by Special Teams Football Academy at 10:52 PM No comments: